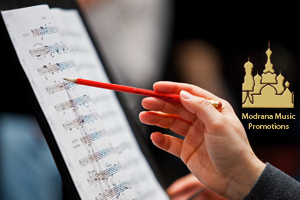 "Many thanks for the brilliant job you have done on the Modrana web site. I am thrilled with the end result."

Modrana Music Promotions Limited is run by renowned English Composer, David Golightly. David has composed prolifically for TV, film and theatre. Most notable credits include “Blue Remembered Hills” (Dennis Potter – BBC) , “On The Razzle” (Tom Stoppard – Royal National Theatre), “The Glass Menagerie” (Film 1973 – Katharine Hepburn), “Cider with Rosie” (Film 1999 – Charles Beeson), “Under Milkwood” (Film 1972 – Richard Burton, Elizabeth Taylor, Peter O’Toole), “Out of the Depth” (Film 2000 – Sean Maguire, Danny Midwinter) and “I’m no Angel” (Film). David has had performances of his music as far afield as America, Germany, Poland and Russia. He now combines a hectic freelance career working as a commercial orchestrator with that of a classical composer and conductor.

InForm acted as a web agency for Modrana Music Promotions, developing their online presence with the design of a new website aimed specifically at facilitating the hire of Arrangements and the purchase of sheet music and recordings, and promoting the work of Composer and Business Owner, David Golightly.

Many thanks for the brilliant job you have done on the Modrana web site. I am thrilled with the end result.

Drupal CMS Website Design Lancashire Drupal is an open source content management platform (CMS) which powers millions of websites and applications. There is no proprietary code, it’s fully extensible and flexible and you have access to an active developer community worldwide. There’s a huge market of Distributions, Themes and Modules available for Drupal which can … END_OF_DOCUMENT_TOKEN_TO_BE_REPLACED

WordPress Website Design Lancashire WordPress started in 2003 with a single bit of code to enhance the typography of everyday writing and with fewer users than you can count on your fingers and toes. Since then it has grown to be the largest CMS tool in the world, used on millions of sites and seen … END_OF_DOCUMENT_TOKEN_TO_BE_REPLACED